Home » On the Wall » Decorating with Maps: Inspiration Board

Decorating with Maps: Inspiration Board

Decorating with Maps made a resurgence into society a little while ago.  For some reason they seemed to be confined to lampshades at first!

I’ve always loved the idea of having a really huge world map covering an entire wall.

Of course as a child of the 80’s I was raised on James Bond movies, so somehow in my mind, that meant that the world map had to be accessible behind secret sliding doors disguised as bookshelves, revealed at the touch of a button (which would be housed under a leather and wood paneled desk which would also hold the all important red telephone of course).  There would be lights, and we would be able to see the exact positions of nuclear submarines around the globe.

I’m not entirely sure, at this point, what exactly I planned to do with the knowledge of the worlds naval fleet positions, but it was an integral part of the world map vision.

Fast forward to this summer, and we’ve finally purchased a wall map of the world, albeit of a more benign nature and easily procured from one of my favourite establishments. I speak of course, of IKEA. (Ooooh You can dance…You can jive…having the time of your life) Are you singing it in your head yet?

I give you… the Premiär Picture

It’s a fantastic size (200cm by 140cm) and looks great against the wall of our open plan dining room/family room area.

You can find it online here, decorating with maps – and this is one of those great times when you can flex that IKEA family card because swiping it at the till gave us a great discount too.  It came boxed up, with the map rolled up in a tube, and the fittings to mount it inside the box. It took me all of 15 minutes to assemble it, and that was while being extremely picky about getting it perfectly straight, and whilst the kids were trying to help me.

Upon closer inspection, it may not be the most accurate map ever (in terms of country size etc), but since it is a flat canvas and not a constantly updated satellite image (and alas no nuclear submarine tracking system), it does it’s job perfectly well.

Note: I found a cushion to match – from John Lewis, which will go beautifully on the white sofa that is currently opposite the map. You can see it on my Decorate and Organise Pinboard at Pinterest. This composite illustration below shows the two items I already own, and the cushion I’d like to add to the ensemble.

Extra note: This is not in anyway a sponsored post, neither IKEA nor John Lewis have any idea I’m posting it, and the opinion herein, is entirely my own. 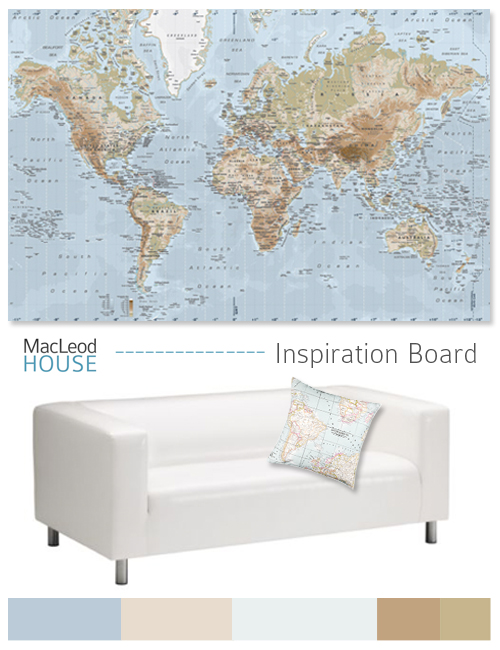 Creative types take note – you can download the colour palette swatch file for free, here. (For use in Photoshop, PSElements, Illustrator, InDesign etc).